In some instances, the occurrence of a wildfire can mean devastation for species with restricted ranges and population; however, for one of Michigan’s rarest warblers, fires are crucial for building its niche habitat and sustaining the population. The Kirtland’s warbler is a member of the Parulidae or New World warbler family which measures about six inches in length and is distinguishable by the striking yellow plumage on its throat and breast and split white eye rings. As is the case with many of Michigan’s bird species, the Kirtland’s warbler nests in parts of the Upper and Lower Peninsulas during the summer months and makes the long journey to the south for the winter months – in this case a 1400 mile trip to the Bahamas. While it may seem as though this long-distance flight would be the toughest part of life as a Kirtland’s warbler, the largest challenge this population faces comes from its time up north. 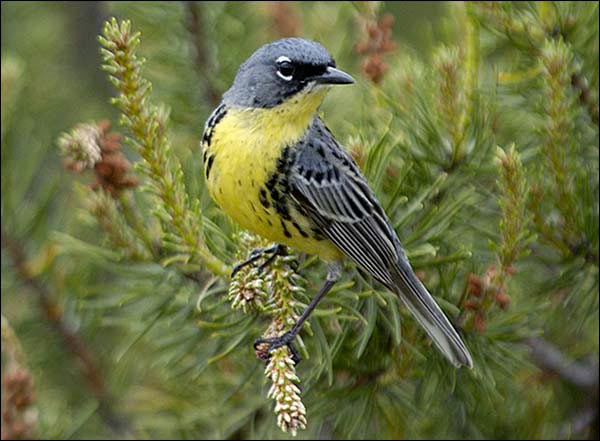 Although not immediately obvious by the forested landscapes known today, Michigan’s history is one of expansive barrens and frequent fires. Many grassland and barren species adapted to this cycle of burnings, one of which is the fire dependant jack pine tree. Heat is necessary to the lifecycle of the jack pine, as it promotes the trees cones to fully open and successfully germinate. With the suppression of fire, young stands of jack pine become less and less common and old stands grow dense and tall, losing their lower branches due to lack of sunlight. The degradation and succession of the jack pine ecosystem reasonably follows this lack of fire, but what was not suspected was the subsequent decline in the Kirtland warbler population.

According to the DNR, Kirtland’s warblers nest in young jack pines on branches that essentially touch the ground, where they can hide their nests among dense thickets of pine and grasses. In order for these conditions to occur, the pines must be young and small so that sunlight can reach the ground and keep the lower branches of the trees alive. This also requires the occurrence of frequent fires to remove older trees in exchange for the germination of their cones. Without these fires, the selective female warblers will refuse to nest and, according to the Cornell Lab of Ornithology, only single male warblers will continue to live in the old, successional stands. Another major benefit of hiding nests in the lower branches of young jack pines is protection from the parasitic brown headed cowbird, which will remove warbler eggs from the nest and replace them with eggs of its own.

Today, with the importance of fire and the jack pine to Kirtland’s warbler populations known, effort is being placed to conserve this habitat and the warbler population. Several of MNA’s sanctuaries house populations of jack pine, including Redwyn’s Dunes Nature Sanctuary, and today birders can view this rare bird through tours given by the Kirtland’s Warbler Recovery Team. According to the DNR, the best way to support this endangered species is to educate yourself and those around you through research or attending birding tours, as well as to donate to local organizations, like the Michigan Nature Association, dedicated to protecting and rebuilding the warbler population.